The feudal system in the "dark ages" was justified by the belief that one group of people (the nobles) was inherently better than the rest (peasants, serfs, general peons, etc.) - there was a natural hierarchy due to their ‚Äúbreeding.‚Äù The ‚Äústrong‚Äù could repress the ‚Äúweak‚Äù because it was their natural birthright. By the time the USA was founded, thought had evolved and the founding fathers, with strong Deist influence, using logic, concluded that all people are created equal, and so the founders forced civic equality by law. The equal rights to life, liberty, the pursuit of happiness, to vote and choose your own governance (although at the time only included white, male landowners), was at least a baby step in the right direction.

But we're only halfway there. The next step is economic equality. Basing pay on inherent skills still creates a new feudal system based on birth. Many people with rarer skills assume they are inherently ‚Äúbetter‚Äù and it's their natural right to get rich using the work of the poor (and they may claim it‚Äôs because they worked harder). In the dark ages it was inherited from who the parents were (e.g. nobles or serfs), currently at least it's what abilities we are born with (worker, manager, rock star, etc), which is a step in the right direction, but still flawed.

If all people are indeed created equal, how can we accept a society where one person is worth more than another? Pay can not be based on the skills people have, because God or Nature made us all different so we fulfill different functions. That is how society always works. People can "move up" or get an education to fulfill their natural talents but not everyone was born with the ability nor can everyone learn to be a CEO or a manager or a mechanic or an opera singer or basketball player or whatever. Why should people have to be something other than what they are to be valued, as long as they are doing the work? People should be valued for who they ARE NOW!!!

The word ‚Äúvocation‚Äù is from late Middle English: from Old French, or from Latin vocatio(n-), from vocare ‚Äòto call‚Äô (and related to ‚Äúvocal‚Äù). In other words, our vocation is our ‚Äúcalling,‚Äù it‚Äôs what we are. (Or supposed to, or have the potential to, be.)

In languages that have two verbs for ‚Äúto be,‚Äù one being temporary (e.g. i am happy) and the other permanent (e.g. i am tall), what your job is, falls under the permanent one. For instance in Spanish, the infinitive ‚Äúestar‚Äù is temporary, such as ‚Äúestoy feliz‚Äù (i am happy), and ‚Äúser‚Äù is permanent, as in ‚Äúsoy marinero,‚Äù that is ‚Äúi am a sailor.‚Äù

Most children inherit similar characteristics from their parents. How many families where the parents were geeks or athletes do we see where the children are also geeks or athletes? Statistics on IGE (Inter-generational Elasticity) can be difficult to sort through. A reference i saw before said that it is 15% (whatever that means). See below for several references. This doesn‚Äôt mean we can‚Äôt learn things or grow or become better, but we all have certain inherent abilities and limitations. 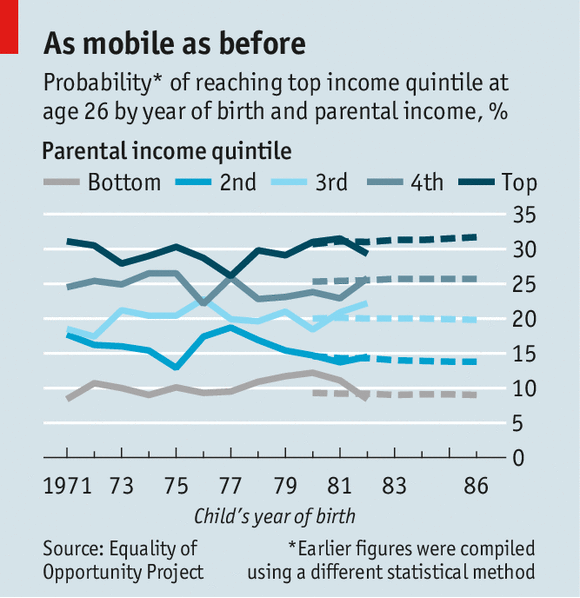 ‚ÄúApproximately half of parental income advantages are passed on to children. The IGE, when averaged across all levels of parental income, is estimated at 0.52 for men and 0.47 for women. These estimates are at the high end of previous estimates and imply that the United States is very immobile.‚Äù

Like civic equality before, economic equality must be forced by law, because it is right, and it is time. There is no way to do it completely without unwanted consequences, but we try, we work towards it, it becomes our goal. It's gonna happen; do we want to do it the easy way, or the hard way?¬Ý

Even if everyone was born exactly the same and worked exactly as hard as everyone else their whole lives, all organizations (and society as a whole) still have a pyramid structure, there is only room for one CEO, CFO etc., a few higher level managers at the top. (Except organizations like Alcoholics Anonymous or Occupy Wall Street where leadership is shared, but oh my God forbid; they‚Äôre socialist!), We require people to do the more common jobs (manufacturing, janitor, farm worker, etc.) and then we use their work to make money for ourselves, and refuse to give them their fair share. If i use a road, computer, electricity, chair, pen, or anything else, then i owe the people who designed, made, transported and sold those things, because they earned part of ‚Äúmy‚Äù earnings for me by making it even possible for me to do my job! The people who grow, process and transport our food are not only some of the hardest workers but we owe them our very lives!!! None of us makes anything without them.

Also for example a CEO has many perks with his job, a nice office, meets lots of people, has job opportunities, etc. while the strawberry picker has far fewer, so actually maybe the picker should get more money to compensate for the fewer perks, and eating a peanut butter sandwich lunch from a paper bag in the back of a pickup truck, plus higher risk of skin cancer and back problems. Not that a CEO's job isn't stressful, i'm just saying‚Ä¶.

None of this has to do with people who work less or not at all, that‚Äôs a completely different discussion on how we want to help people get work so they can make an equal contribution. This discussion is about equal wages for people who work equally hard, for example a strawberry picker and a CEO working equally hard should get paid the same. If another strawberry picker and another CEO are lazy or don't work as hard, they should get paid less. ¬ÝThere are plenty of lazy CEOs, mid-level managers, etc; all classes of employees have their hard workers and their slackers.

Total economic equality could never be forced (civic equality isn‚Äôt either, for example felons can‚Äôt vote, although making things worse for them like that might not help); we can all do other jobs or sell arts and crafts or CDs or walk cats on the side; some companies will always go out of business, etc. But we have unemployment insurance, retraining etc. and socialist safety nets because we realize that at any moment any of us could be in that situation, and we want to take care of each other. Under socialism people would still get fired for incompetence, and companies will always be looking for better employees - the best person still gets the job! If one employee isn‚Äôt as good, get a different one! But as long as they are doing their share of the work, pay them their fair share of the results!

Capitalism claims that people wouldn't work if they aren't motivated. But making greed the motive adds a layer of fakeness and hides the real reason for working, which is to provide services to others while everyone else provides services to you. Nothing would happen without that. You may build cars to earn a living and feed your family, but if other people didn‚Äôt need cars you wouldn‚Äôt be able to do that. Their need for cars comes first and that‚Äôs the only reason that job even exists. Money, or making money the reason, separates us from the reasons for our work, and from the people who benefit, and allows us to avoid bargaining with them directly for exchange/payment.

Do you train your kids to clean their rooms by giving them candy every time they do, or do you teach them to clean their rooms because they should, and because it's better for them? Certainly, incentives are used for children, but even the Soviet dictatorship provided bonuses to teams of workers who were more productive. But if we base our system on how children act, when will we grow up? If kids keep their rooms clean only to get candy, what will happen when they go to college and there's no more candy being given out?

People like to say the USA is so great because everyone wants to come here. But if someone's mom served only candy for dinner, everyone would want to go there, and it would seem great! ¬ÝYou'd have energy and you'd feel great! Until your teeth started to rot, you got malnourished and died. People also like to go to Europe and Canada.

Another thing people say is if everyone got paid the same, nobody would hard or try to improve themselves, they'd just take easy jobs. But wouldn't you get bored and want a challenge? Or want something more interesting or fitting to your skills than where you are? We should work harder because we want to accomplish more and be better or do something more interesting. Those are the "real" reasons, as opposed to money.

And then someone who loves and is great at picking strawberries can still do it and feed their family. As long as we rely on greedy motives instead of improving towards altruism, how will humanity ever improve? Productivity can still be measured and rewarded, via performance reviews, etc. as it is now.

Actually I would prefer that instead of "government" getting involved, all the people who make less than the average would go on massive nationwide or international strikes until pay is made fair. That's people who have "collectivity" using their free will and initiative to balance out those who have the opposite advantage of "uniqueness." That's fair right?

People fought and died to get rid of the sweatshops, child labor, 12 hour workdays, etc. but the problem is the system tends to regress and this process would have to be repeated repeatedly. So we the people decided to put labor laws in place to maintain the equality, just like we already do with the right to vote, so those issues wouldn‚Äôt have to be re-fought endlessly. But the disparity in income between rich and poor is getting worse, maybe because people have gotten complacent with their lot and stopped fighting for it. If we don‚Äôt do something to move towards fairness, these issues will end up being fought.

I didn‚Äôt formally get into all kinds of theories like Keynesian economics or the work of Milton Friedman, because i didn‚Äôt want to write a whole book LOL. But one principle of some theories, and the work of Ayn Rand, is that people act in their own self-interest. That may be true, but is that what we want? Animals and cavemen do that, actually even cavemen likely acted in the interests of their communities as a whole, possibly because it‚Äôs easier to see it. If we base economic systems on self-interest, won‚Äôt it tend to anchor us into that behavior? But the golden rule, love your neighbor as yourself, a mainstay of many religions, dictates that we should work towards the interests of others at least as much as our own. Shouldn‚Äôt we work towards that by using systems that encourage that? Because everything works better that way!

0/5 (0 Reviews)
Register or Login on the MAIN SITE

Search The Bible By Word Or Phrase

To Search Members Go To DATING